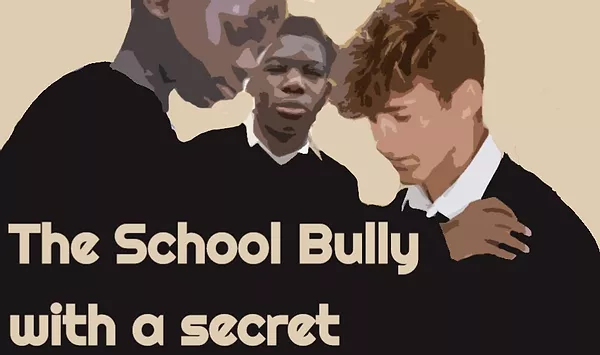 This fictionalised retelling is based on actual events. This story covers school bullying, and scenes can be construed as graphic and violent. If this subject matter is upsetting, please do not read any further. For help and advice on bullying, please go to https://www.nationalbullyinghelpline.co.uk/. This story does have sexual acts of boys aged 13 years old. If it is illegal to read such material in your jurisdiction, or if you are under the legal age to do so, please exit this site immediately.

This story follows Nick when he was younger from my other story, “The Special Relationship.”

Nick is sitting on the benches in the changing rooms. All his classmates are doing PE with Mr Andrews out on the sports fields. Nick had successfully gotten out of PE again. He hated Mr Andrews nearly as much as he hated PE. Equally, Mr Andrews did not like Nick and would try and make his life hell and would try his best to find the most horrid tasks for Nick to do.

The changing rooms have a smell like no other—a mix of smelly boys’ feet, wet grass and an acrid body odour. Nick was forced to sit in that smell on his own and was regularly ordered to sort out the lost property.

The gym’s lost property was a mix of used, smelly socks, shorts, underwear, tops and other sporting apparel. He would have to check each item for a name tag. The ones with name tags would get hung up so the other boys could check and find their lost items. Any items that didn’t have name tags would go back into the box. Ready for any poor soul that forgot the sports kits and would be ordered to wear items from the lost property box. Nobody ever forgot their sports kit!

Nick had started to develop a liking and a craving for the changing room smell. He also found it arousing to handle clothes that had been worn by the other boys. If he found any underwear or shorts, he would sniff and rub them over his face. It would get him hard. He would rub them around his cock. He found he was so turned on by it that he loved being set the task – unbeknown to Mr Andrews. Who thought it was a punishment for Nick.

Nick had got himself going on a jockstrap. He had sniffed it and rubbed it into his face. The jock had a strong smell of sweaty bollocks. They had been well used. He put them over his head, so the triangle of fabric covered his face. He sucks in the smell of the fabric as he rubs himself.

He unzips his flies and gets his small hard boy cock out, and rubs it with his hand as he breathes in deep the hot smell from the jockstrap. He takes the jock off his head and wraps it around his hard cock. Thinking about the other boy’s cock that would have been rubbing and sweating all over the jockstrap.

As he rubs the jock around his cock he sees a name tag sewn inside. He looks at the name. It is Jason Banda’s jockstrap.

Jason is the school bully and was the most dominant boy in the school. He has always had it in for Nick. Nick has never known why. Jason can get anything he wants. He comes from a wealthy and powerful family in Zambia. Nick was sure Jason’s parents had paid all the teachers off to give him special treatment. He had been made a senior prefect and was always the captain of the sports teams. Nobody could touch Jason, and Jason could get whatever he wanted.

Nick forces himself out of the fantasy. Nick wants to keep Jason’s jockstrap for later. He tucks the jockstrap into his pocket and puts the lost property box away.

He walks down the row of hooks where all his classmates have hung their school uniforms. He is trying to scan and see if he can find Jason’s hook and clothes. He is looking at the blazer for the senior prefect badge. He finds two, but they are not Jason’s.

Nick is interrupted when the boys all come charging in from the sports field and into the changing room. They are all muddy and sweaty with hockey sticks over their shoulders. Nick quickly moves out of the row as his classmate comes in.

Nick walks over to Mr Andrews, who is shouting at the boys. “Quickly now, lads. Into the showers. You haven’t got long until the first break.”

“Yes, Sir.” Says Nick as he makes sure Jason’s jockstrap is shoved well into his pocket.

“Well, what are you waiting for, boy? Get off to your next class.” Mr Andrews hisses at Nick.

Nick leaves the changing rooms. He wanted to stay, watch his classmates shower, and get dressed, but Mr Andrews always sent him away. It was like he knew Nick wanted to lust over the other boys. He would send him away early as punishment.

Nick was back in his classroom at his locker. Nick hid Jason’s jockstrap in the back of his locker under some books. Nick had a tin of sweets in his locker and was tucking into a Wham bar. The school had banned tuck two years ago because of the litter at the school.

The 11 o’clock bell rings. It is now the first break. All the boys from the school pile out of the classrooms and out onto the playground.

Jason and another group of sporty boys come into the room. They smelled clean from the showers and full of energy. Jason waves about his hockey stick when he spots Nick at the lockers.

“Oi, skiver. Give me one of those.” Jason says as he shoves Nick into the lockers.

“I will sell you one.” Nick smiles back at Jason.

“What do you want for it?” Jason says in disgust.

“Pound.” Nick grins, knowing that he has a sale here.

Nick is always selling his tuck to the boarders. He buys Wham bars for 10p and sells them for £1. A good profit, and all the boarders have so much pocket money they don’t care about the markup. The truck ban has made Nick a tidy profit.

“Let me get you some change,” Nick says as he turns around and bends down into his bag to get his cash tin.

Jason looks down at Nick bent over his bag and then at his hockey stick. He can’t resist it. He hooks the hockey stick up between Nick’s legs and pulls up hard, lifting Nick off his feet.

Nick goes to grab his balls that are getting smashed and squashed with the hockey stick and lets out a yell.

The yell gets the attention of all the other sporty boys. They circle around Nick, chanting, “Wedgie! Wedgie!”

One of the boys says, “Go on, Jason. Lift him right in the air.”

Chanda grabs the other end of the stick, and both Chanda and Jason lift Nick high in the air with the hockey stick right between his legs.

Nick is holding onto his crotch in pain with his mouth open.

Two of the other boys hug each of Nick’s legs, putting their full weight on them to increase the pull on the stick. The stick breaks in half, and Nick comes tumbling down onto the two boys holding his legs.

Nick is rolling on the floor, holding his sore balls as all the boys get up and laugh over him.

Jason is holding the two halves of his hockey stick. Not pleased it has broken.

“You’ve fucking broken my hockey stick,” Jason says to Nick. “You’re going to pay for that.”

Jason shoves his broken hockey stick in the bin and picks up the £10 note off the floor. He shoves the £10 note back into his pocket. He then takes a big handful of tuck out of Nick’s tuck tin.

Jason and the other boys leave Nick in a ball on the floor. Nick knows he can’t report Jason as he is breaking the rules for selling tuck. Also, it is Jason. He never gets in trouble.

I am interested in feedback, so please send comments, questions, story ideas, and information about what worked/didn’t work to me directly. I’d love that feedback and am interested in improving my writing. I’m also interested in meeting others who share my interests, so don’t hesitate to reach out please.